We have enjoyed our time in Seward.  The sun shining most of the time helped a lot. After hearty breakfast BELT (bacon, egg, lettuce, tomato) sandwich we had a good walk around the harbor.

This whole meadow was covered with wild iris. 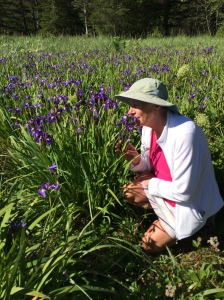 We have been watching sea otters feeding in the bay right in front of the camper.

It has been very interesting watching the cruise ships coming into the harbor every few days. They arrive in the middle of the night and leave the next evening.

Coal from a mine a couple of hundred mile away arrives by train and is then loaded onto ships for export.  I was surprised to find out coal was one of Alaska’s biggest exports.  It took nearly a week to load this ship from China.

We stayed up to watch the 4th of July fireworks.  It was packed on the waterfront.  Lots of campfires and kids running about.

The harbor was full of boats and kayaks.

The display started at 12.01am on Friday morning as it was the darkest part of the night.  It was almost 1am when we took this photo.  As you can imagine the fireworks were not too dazzling in such bright light.

Seward is famous for the Mount Marathon race. This little town of 2500 expands to over 20,000 for the race weekend.

The runners have to start in town and reach the 3022 foot peak and return. It’s about 1 ½ miles to the top. It does not look that high in this picture by the camper but the trail is almost vertical.

This is the start of the mens race.  The fastest time was under 43 minutes.  It would take me that long to reach the trailhead.

Everyone wants to see the runners scrambling/falling down the steep end bit.  We saw a lot of road/trail rash but no broken limbs.

There was not one ounce of body fat on those guys. 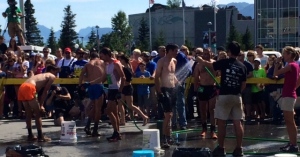 We have made good use of the libraries free wifi. Those iridescent walls really stand out.

On the move again tomorrow even though rain is forecasted.