We have had a busy time these last few weeks.  We have been “Historied” up to the eyeballs in early America.

Dean enjoyed holding Pocahontas’s hand in Jamestown, Virginia. This settlement has been made into a National Historic Park and was very interesting.

I was fascinated by this display. No one knows for sure what Pocahontas wore on her wedding day but over a 100 women across the country worked 1400 hours on the embroidery of the cap and top of this outfit. They had to audition for the project by sending a sample piece. 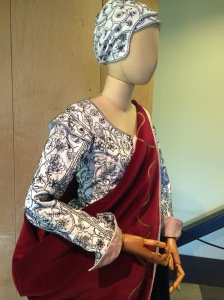 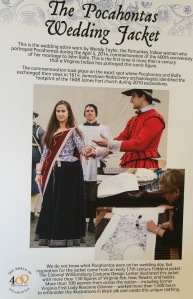 After seeing this plaque about Thomas Jefferson I just had to give him a hug in historic Williamsburg .

We did not commit any crime.  Really!!

A demonstration of glass blowing was good. The guys all wore period costume but I don’t think sunglasses were invented back in the day.

We put in some serious foot time in Washington D.C.  Over 35 miles in 5 days (11.5 our biggest walking day).   Our first stop was the Arboretum.  Our favorite area was the Bonsai.

This Japanese White Pine has been in training since 1625. It actually survived the atomic blast in Hiroshima in 1945. Now that’s a sturdy plant. The Azalea looked pretty with the multi colored flowers. 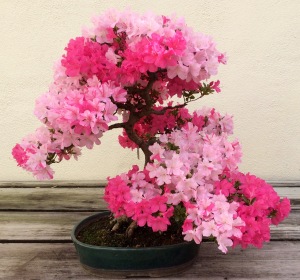 I just had to cosy up to this Azalea.  I managed to snag this pic of a bumble bee on the wisteria.

We hoofed it all over town. Had to have pic of us under South Dakota (our mailing address) at the WW II Memorial. 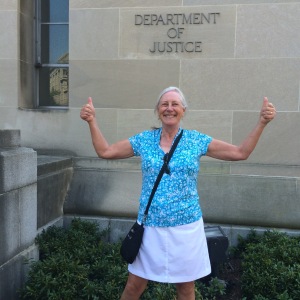 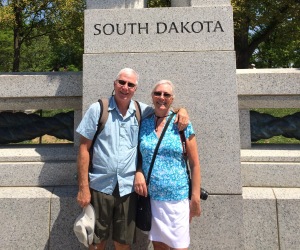 At the Lincoln Theater I tried to look as studious as the great man.  This is the box he was in when he was murdered by John Wilkes Booth.

Every book in this tower is about Abraham Lincoln.  His statue is pretty impressive. 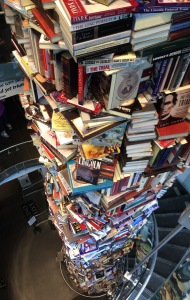 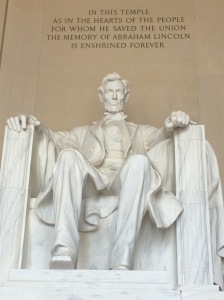 All the museums and historic areas in Washington D.C. are FREE.  (Free is my favorite word followed by 75% off).  We were mightily impressed by all this free goodness.

We had a nice tour through the Capitol.  It’s getting a bit of a facelift. I think my foot is pointing to something but I can’t remember what. 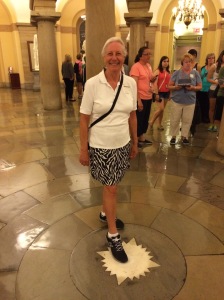 In the Smithsonian Natural history museum, Dean checked out the Dinosaurs and the human evolution exhibits.   I went straight for the largest diamond in the world. The famous Hope Diamond, over 45 carats and beautiful. The whole gem exhibit was fabulous.  I guess those ancients beasts were OK too. 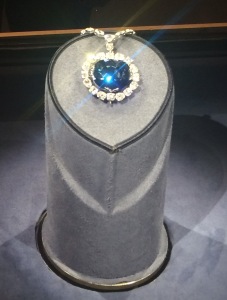 Onward to our wonderful Kirkwood cousins.  We had a lovely time catching up on Kirkwood history and just plain enjoying our super extended family. Thanks John, Barbara, Nicole, Todd and nippers for a smashing layover. 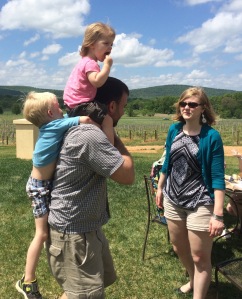 Shenandoah National Park was a nice last stop for Virginia. OK,  this is a bit macabre, but we just HAD to stop and check out this tiny family cemetery in the park which is still private as long as the Dean family maintain and keep croaking and getting buried there. 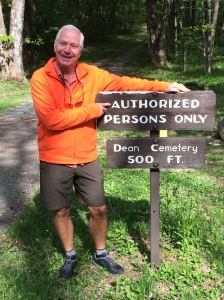 One of the reasons we camped outside the park was this low tunnel and also the narrow windy road. The little grass snake stayed on our path to say hello.

Our last view from the Skyline drive through Shenandoah National Park.  Virginia, Thank you for some really nice weather which has made this part of our trip most enjoyable.

2 Responses to Virginia and Washington D.C.