We had a great day out at the Kennedy Space Center. Mr. Spaceman was kind enough to have his picture taken with us.

The space shuttle Atlantis was amazing to look at.  To think this scratched up beast flew astronauts millions of miles about in space.

The striped thingies are solid rocket boosters and the orange one is a liquid oxygen/hydrogen tank. Empty now of course. I felt quite tiny stand below these behemoths that got the shuttle into outer space. 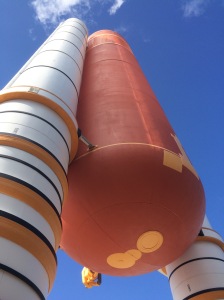 We managed to spend a good eight hours checking out all the neat NASA stuff.

We saw the moon dust on Alan Shepard’s lunar suit plus some moon rocks.

There were rockets from several mission to gaze at.  We even got to meet an actual astronaut from back in the day.  We had already been to the movies and watched “The Martian” with Matt Damon which we really liked after listening to the book a couple of times over the last two years.  Now we are all hyped up for the world to get moving ahead with more space exploration.

This blue heron has been hopping around the campground. He/she let me get very close for this pic. 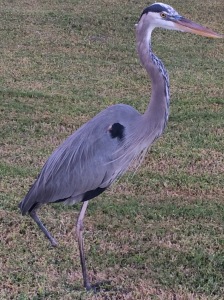 We had a lovely Thanksgiving meal with some of our new made pickle ball friends. Thanks so much Bob and Donna.  Now it’s time to pack up and move down to Miami. Hopefully have some “Beautiful People” shots.