Zion National Park and my Boys

Jay flew into Phoenix so we managed to squeeze in a couple of hours pickle balling at our campground. Jay is fast and flexible but Dean has some pretty good old geezer skills too.

We camped one night in the desert. I even heard some coyotes in the night.

Jay impressed us with his acrobats.

We had a lovely hike.  Where is my other lad you might ask.  He is coming in a couple of days. Dean got a reprieve as Jay carried the backpack with lunch. I should have put a few rocks in the bottom as he was leaping up the trail like a gazelle.

Lots of Indian Paintbrush popping up. 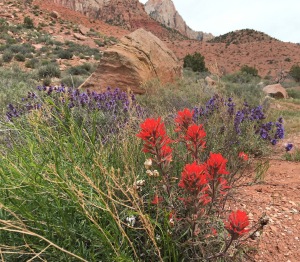 Jay and Dean did a little “Bouldering”

Dax finally arrived. I am so happy.  Now we are a complete set.

The boys had a couple of good canyoneering days. They had so much equipment we had to put up our screen shelter to hold it all.

They rappelled down very deep canyons, waded through freezing water, climbed out of the canyons and rappelled back down many times over. Our  job was to shuttle and supply the grub. 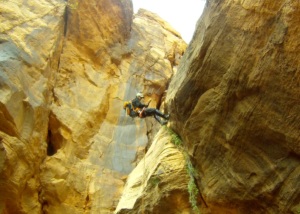 They said they had fun but it looks like hard work to me.

The park had no hook ups for water so the lads hauled many, many containers and pumped it in the rig so we could all have a 2 minute shower each day.

Firewood was $7 for a small bundle at the store but we managed to scavenge left over wood from vacated campsites for several great fires. 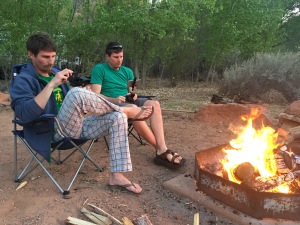 We had a couple of rainy days. This rainbow cheered me up. 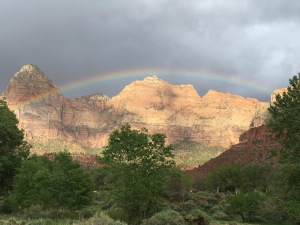 A game of Monopoly and plenty to drink helped pass the time.

I thought their eyeballs were going to pop out while arm wrestling.  Dax and Jay have played rock, paper scissors since they were little kids to decide just about everything. 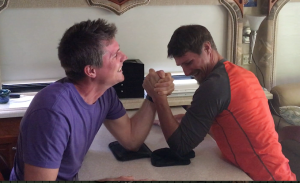 Back to some nice sun and hiking. 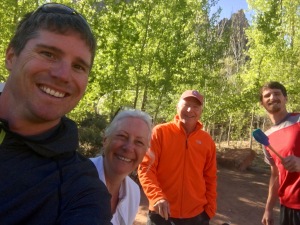 The desert flowers were in every nook and cranny. 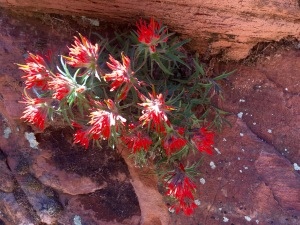 Oh dear! We had to finally send the lads back home. We had a wonderful time. Plenty of hugs and laughs. They managed to empty the fridge and freezer. Thank you boys for spending time with your old fogy mom and dad.

16 Responses to Zion National Park and my Boys