It’s been a fun August. We had a rocky start as it seemed like all the campgrounds were full on our route around the Olympic Peninsular.  The spontaneity of  being able to wing it and  just snagging a campsite at the end of the day is a thing of the past in the summer months.

A great day in Olympic National Park set our heads to rights.  I love hiking above the clouds.

There was still plenty of snow on the peaks.

Even a few patches on our trail

A pretty butterfly was extremely cooperative posing for its picture.

This barn is definitely a fixer upper.

A stop in Port Townsend was a must. An Officer and a Gentleman was filmed there in 1982. 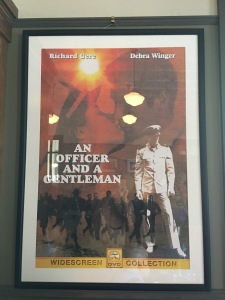 Most of the film was made at Fort Worden State Park. Dean even remembers how to salute from his military days. 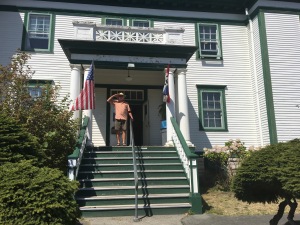 The grounds were green and lush for the movie but even the parade grounds are not watered these days.

We had to take a little nap on the beach where the actors did all their running. I was feeling nostalgic after our day out,  so thanks Dean for watching this chick flick with me that evening. 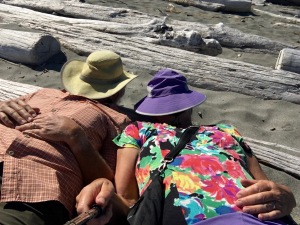 A lovely stop to see our old friends Janell and Kevin.

It’s been several years since we visited Pike Place market. It was just as we remembered. Waayyyy too many people. Basically a giant tourist trap. The only bargains we saw were the flowers. Beautiful big bunches for $10.

On to to Seattle and our lovely boy, Jay. We helped him move into his new house. Actually half of a duplex. (A very old duplex circa 1940’s)  He is sharing a fairly small space with a nice lady he met on Craigs List. They both have dogs and needed a back yard. Apparantly Seattle is quite terrible to find reasonable housing since Amazon moved their headquarters there. Many people are having to multi share to afford the rent.

Anyway we got him kinda settled in and drove the 1 ½ hour  trip back to our campsite. That evening he calls to tell us his house mates dog had jumped the dividing fence to their neighbors yard (other half of duplex and owners of both sides) They had 6 egg laying chickens in their yard which Dean and I had previously admired over the fence. The dog had killed 2 chickens and scared another to fly the coop. Jay and his room mate had spent a couple of hours hunting that chicken through all the surrounding neighbors gardens.  It was finally caught and safely returned.

The landlords were very nice and forgave the whole incident. Hopefully all stays calm from now on.

Dean had a good time playing with Jays dog Maya. That dog can jump like an Olympian. Jay, please train her to leap for a frisbee. We want to see some good tricks next time we see you both.

We moved down closer to Mt Rainier. A nice basic Fairgrounds site gave us striking distance to the park. This National Park is not friendly to large motorhomes. Windy, narrow roads and the campsites are quite small.

The sun was shining and the sky was blue. Oh yeah we had a great time car camping in the park.

The Pasque flower had finished blooming but the fuzzy pod is just as lovely, especially with a Magenta Paintbrush right beside it.

We were about 3 weeks too late on the prime flower bloom but it was still smashing. This whole stream bank was covered with pink Monkey flowers.

We have recently downsized and given our lads our car roof pod and tenting equipment. Now it’s down to basic car camping. Part of our shower kit was used to extend the car sleeping area.

With the seats pushed forward we had a very comfy sleeping space. 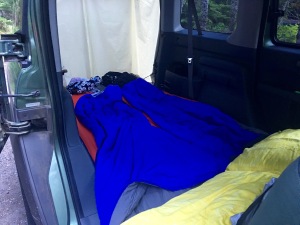 We snagged some free firewood and Dean was a happy camper  drinking some wine and reading a good book on his Kindle.

I HAVE to have my shower and we have a nice little set up. As long as we have cooperative trees we (Dean) can set up a great shower. (Most National Parks don’t have showers)

We set our 5 gallon shower bag on a table in the sun and it had warmed up nicely during the day. Dean very smartly lashed his hiking stick to the trees to hold the shower bag.  After a long sweaty hiking day this is wonderful luxury.

We could not figure out how the campers managed to get into this tent which was lashed high between two trees. 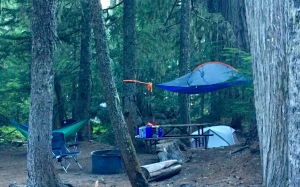 I thought this little camper was really cute. 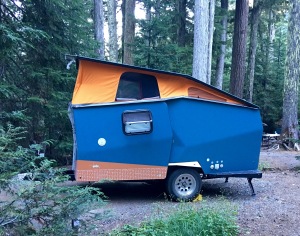 Our last hike of the trip was gorgeous.  One whole side of the mountain was covered with purply/blue lupines.

Time for a cooling rest against this snow bank. 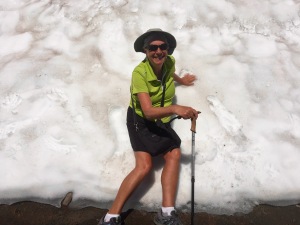 The huckleberries were so delicious we had to keep stopping on the trail for a handful.

Mt Rainier is one of our favorite National parks. So many awesome trails. 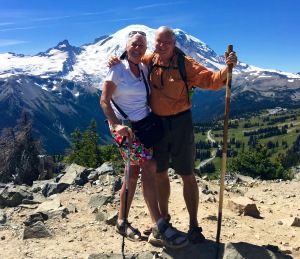 We made a quick stop at Mt St Helens National park. This is the one that blew it’s top off in 1980. There is a little greenery in places but still mostly barren.

There was a fairly long stretch of trail that was very narrow and a had a massive drop off. Thank goodness there were not many hikers on it.

Starting to slowly make our way south to Portland, Oregon.