We have camped in Yuma for the last month.  Across the border in Mexico is Los Algodones.   A little town where Americans and Canadians flock for dental work and prescription refills.  Dean got a filling and checkup for $50.  He also splurged and treated himself to a $3 haircut.

After all that excitement it was time for a walkabout and snag a few shrimp and fish tacos.

Here in the Southwest they have extremely hard water.  There are water stations everywhere that delivers reverse osmosis/mineral free/soft water.  This one has a “pump your own,” salt free water for 25 cents a gallon or 5 gallons for a dollar.  We have a dedicated marine water filter in our motorhome that divvies up pure tasteless drinking water, which is handy as we have come across some really poor water sources in our travels across the country. 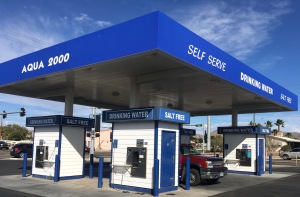 We entered our first mixed doubles pickleball tournament.  I was nervous as Dean is a much better player than me.  However, he was a good sport, even though we didn’t win we had a good time with plenty of games.

According to the Guinness World Records, Yuma is the sunniest place on earth with sunshine 91% of the year.  Looks like we snagged a bit of the other 9%.

Yeah! back to the 91% sunny.  The great result from the rain is the desert is starting to bloom. 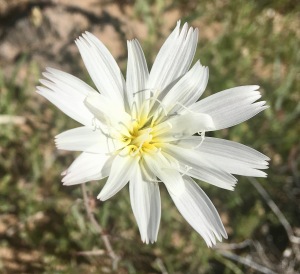 We coughed up $10 each for the entry fee to Castle Dome Mines Museum.  This place has a wildlife refuge on one side and a military bombing area on the other. That’s the desert in the middle of nowhere for you.  This place was actually very interesting.  50 buildings show the history of silver mining in the area.

There were plenty of vehicle husks.  I took a seat in the schoolhouse. 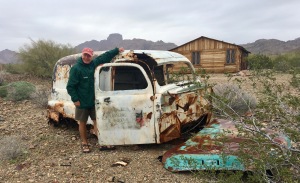 Then Dean had to get waaay to friendly with the teacher.  I had to put him in the slammer  as punishment and he started patting a skull. Oh deary me! 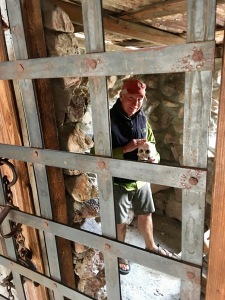 Maybe pumping some fuel would get him back on the straight and narrow. 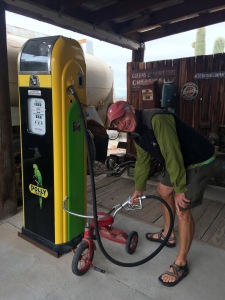 This building is covered from ceiling to floor with war veterans signatures. Dean found a tiny spot to put his name and rank. He did a stint in Vietnam.

There must have been 50 plus saws in this display.  Plus the sharpening stuff below.  I really liked the all the meticulous woodwork that went into making the wheel.

This surveillance drone/air ballon was parked, but we have seen them in the air around the area.  Not sure if it’s for training or actual surveillance.  We are close to the Mexican border.

I just turned 65 yesterday which was the biggest excitement this month.  One small reason is, I like birthdays that end in a 0 or 5 as I can easily remember how old I am.  The best reason is MEDICARE.  For my non American family and friends this is actually socialized medicine that Americans get when they turn 65. No more huge health insurance premiums with  massive deductibles. I am under the governments wing, so I pay small and get big.  I love being 65. 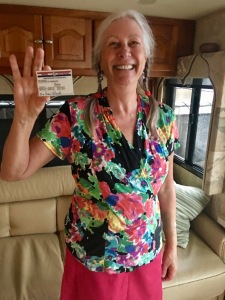 On to Phoenix tomorrow.