June has had some big highs and low lows.  All started well.  We had a couple of great hikes with views of the snow covered Three Sisters.  We really like the high desert area of Oregon.

A few harmless grass snakes stopped by here and there to greet us on the trails.

Lupines in all shades of purple covered the hillsides.

We were happy to see plenty of Balsam Root still in bloom.

I think these are some kind of clover.  I had to take a deep breath to keep my phone steady to get this closeup. 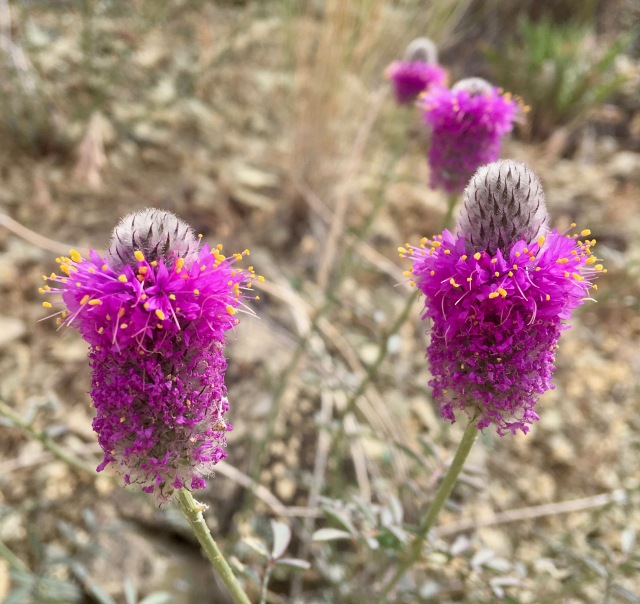 We were thrilled to have our lovely niece and spouse visit us for a couple of days.  The weather turned a bit nippy and drizzly but Robin and Chris were good sports and we took them to Smith Rock State Park.  This park is famous for the hundreds of designated rock climbing routes.  Robin is pointing to Monkey Face which is an expert climb from the base to the top of his noggin.

There are several self help stations dotted about. 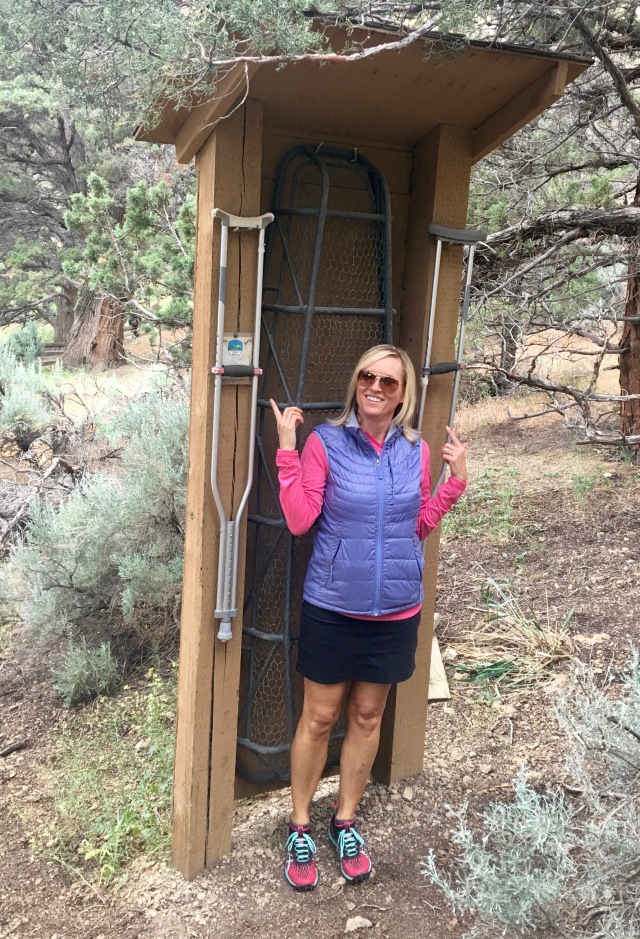 Chris was an excellent gear holder. 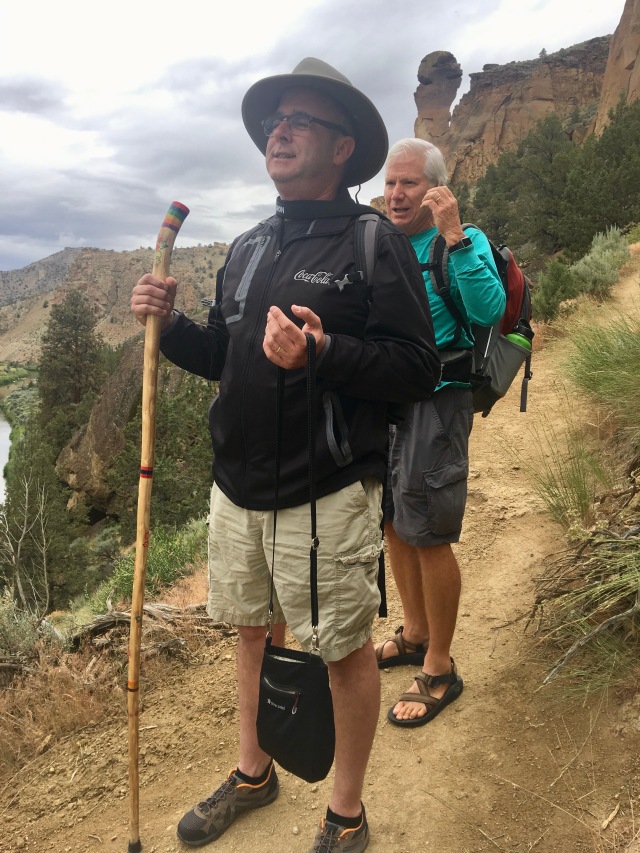 There are super views from the top of the cliffs. The clouds hid all the mountains but at least it didn’t rain. 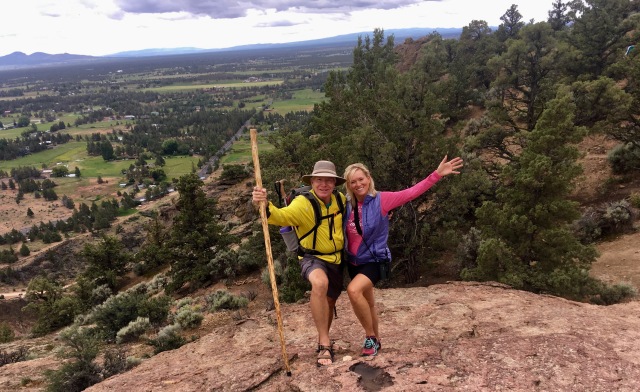 That’s the backside of Monkey Face to the left of Robin and Chris.  The Crooked River is winding it’s crooked path around the base of the cliffs. 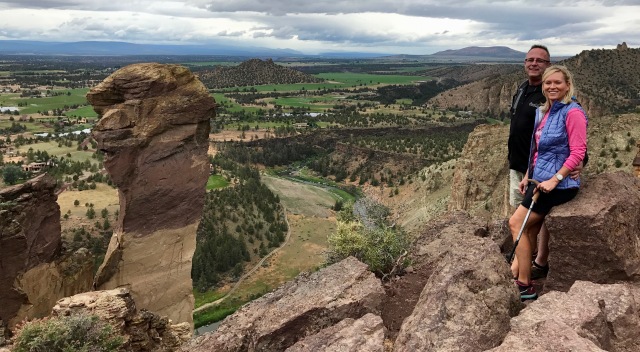 It was a mighty big drop two feet behind us. 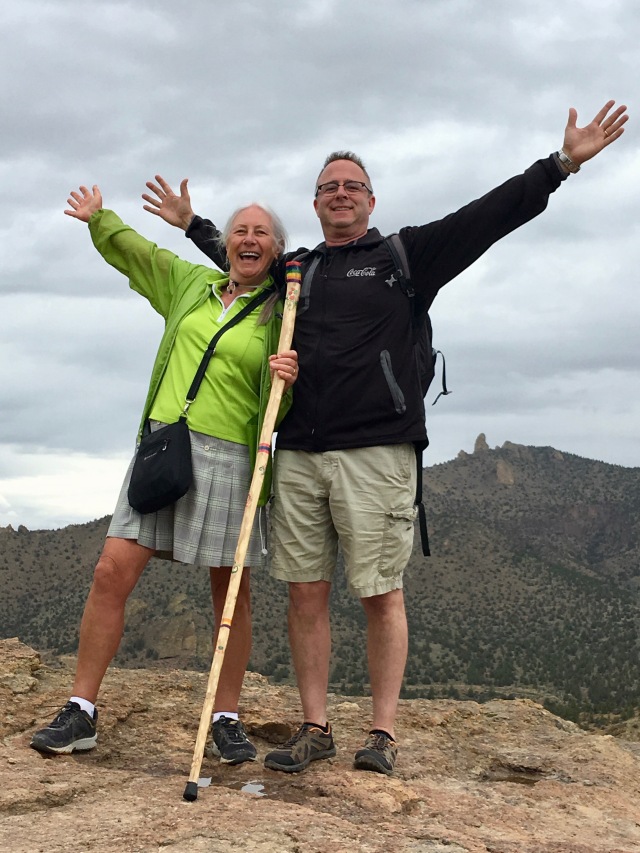 The trail we hiked is called Misery Ridge due to the steep rough trail but Robin and Chris nailed it. 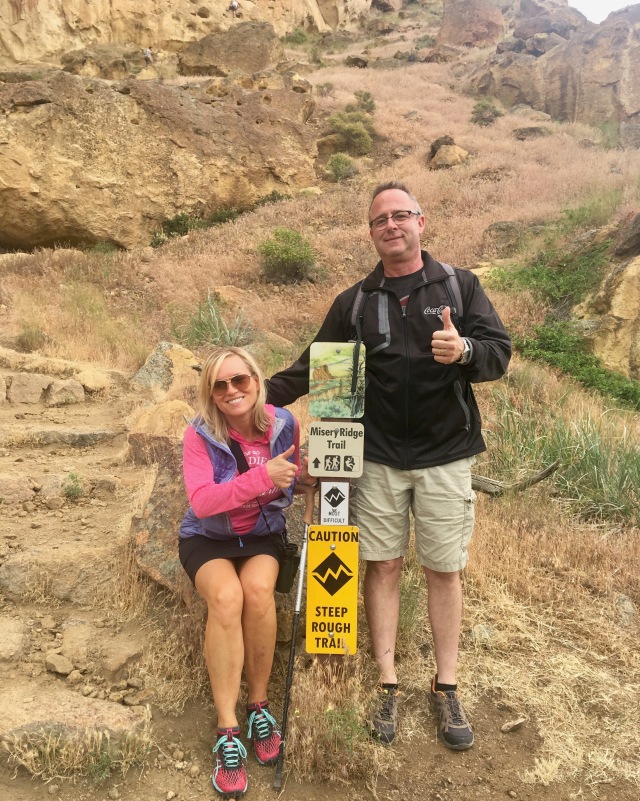 We didn’t see anyone climbing Monkey Face so Chris gave the playground Monkey Face a try out. 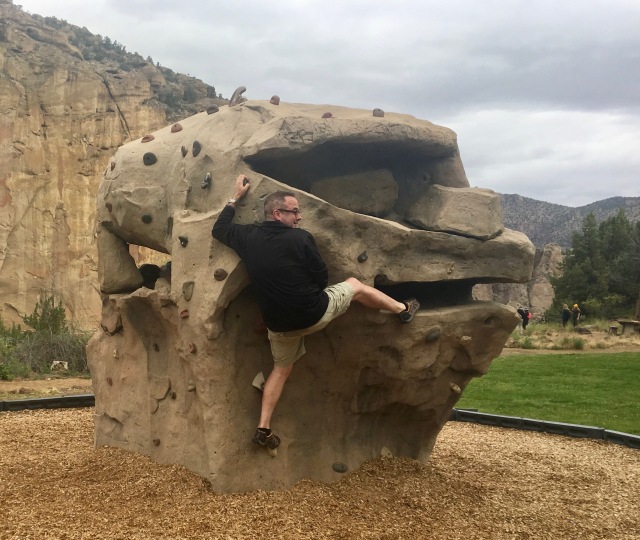 The next day we set off for Crater Lake National Park.  The sun was shining which makes  the lake shine like a giant Sapphire.  This is the deepest Lake in the USA and Oregons only National Park. 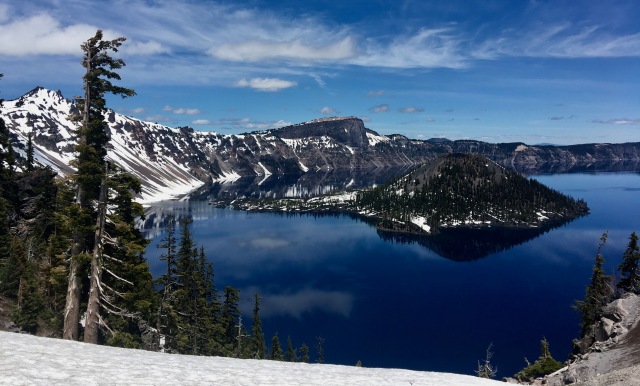 We met up with Deans sister Minita and spouse Ana.  It was a great day family timing.

I bought a picnic lunch but all picnic areas were still snowed in so we had to tail gate it.

Most of the roads in the park were still closed due to snow.  The park service said they may have all the roads cleared by August…maybe.  The park had 48 feet of snowfall this last winter. The snowbank behind us was at least 10 feet high  There was snowball throwing, slip sliding and of course plenty of laughs. 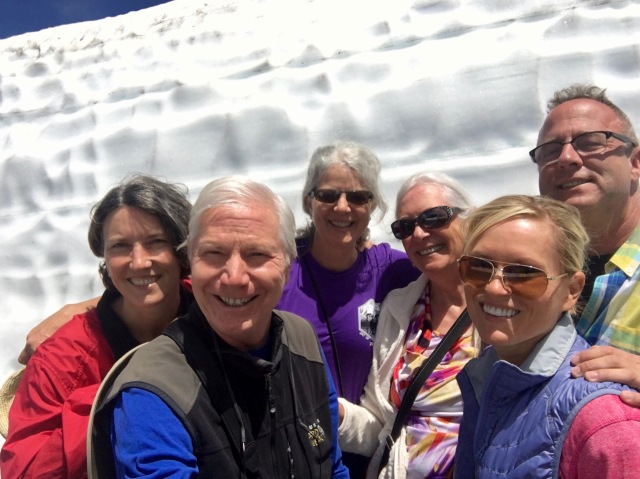 Then came some lows….

Our fridge conked out. Dean tried many fixits over the course of a couple of weeks but the beast was as dead as a doornail.  Only four years old.  It seems like the appliances these days are programmed to bite the dust fairly soon after the warranty expires.

I had to chuck out quite a bit of grub, that made me sad and then we were back to primitive ice blocks.  I basically had a giant cooler.

OK,  I was coping and then…..PACK RAT INVASION!!!  We spent several days fighting the rat war.

We put out mouse traps,  they snacked, laughed and scurried on. Then on to the big RAT TRAPS.  We tried cheese, peanut butter, dried fruit…. More snacking and scurrying to say nothing of p and p (poop and pee). By this time we had pretty much emptied the camper from top to toe.  Every cupboard had to be removed and cleaned out.  They even peed in my slipper.

Dean stayed up till after midnight trying to figure out how they were getting in.  One even had the nerve to lick the peanut butter off a trap and come out in the living room to thank Dean.  Thank goodness I was asleep or the campground would have heard a bit of girly screaming.  Dean said the furry beast was at least a foot long including tail and quick as lightning as it managed to escape.

A helpful lady told us to lay some mothballs as that had worked for her.  We mothballed our camper from stem to stern and YIPPEE it worked.  Two weeks later our rig still smells like a giant mothball but that’s a delicate perfume compared to rat pee. 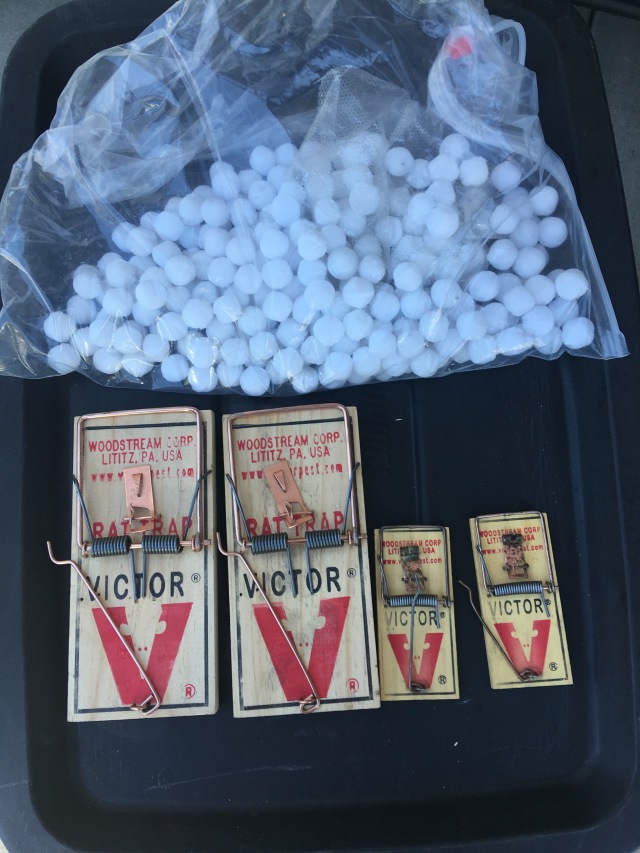 Now back to the highs.  Our lads came to visit.  We had some very hot windy weather.  Climbing at Smith Rock was on the schedule. Dax and Jay are checking which route to follow in the climbing guide.

I sure am glad they are attached to some good rope.

It got pretty hot so Jay had to carry his baby back to the car. 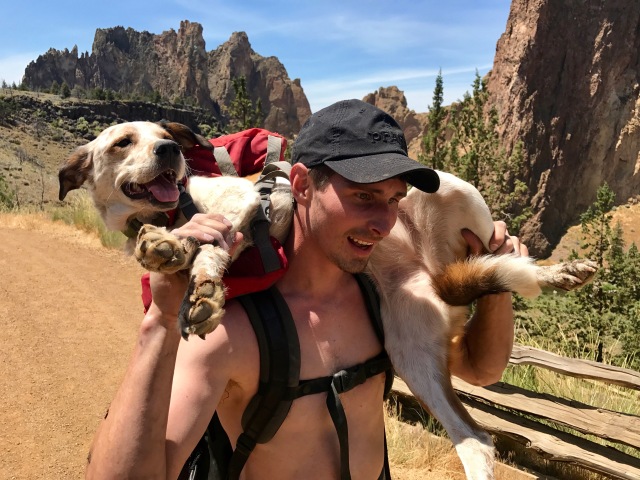 We also had some lovely lady visitors. Monique kept us supplied with a wonderful selection of fresh ground boutique coffee.  Thanks for all the brewing Monique.

Sherry helped cook a smashing vegetarian Thai curry.  Sherry,  I could become a vegan except I have to have my bacon and cheese. 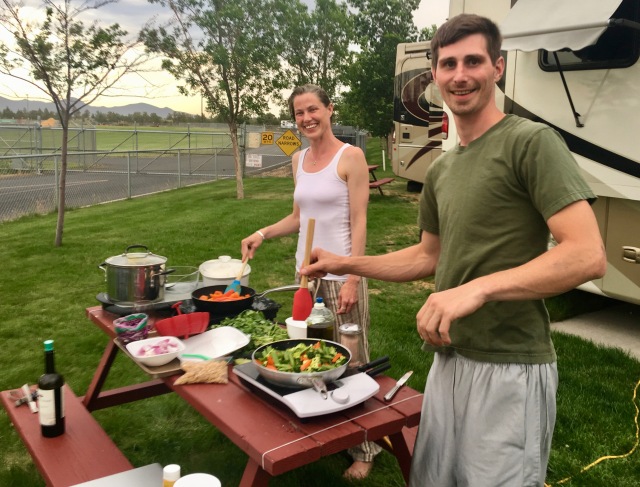 The wind picked up and a couple of us looked a little fluffy. 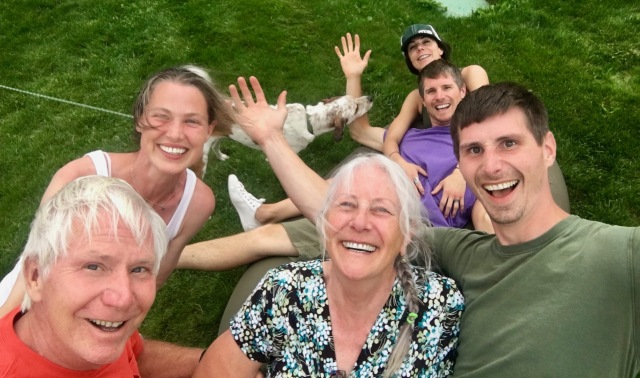 Dean is going for the Albert Einstein look. 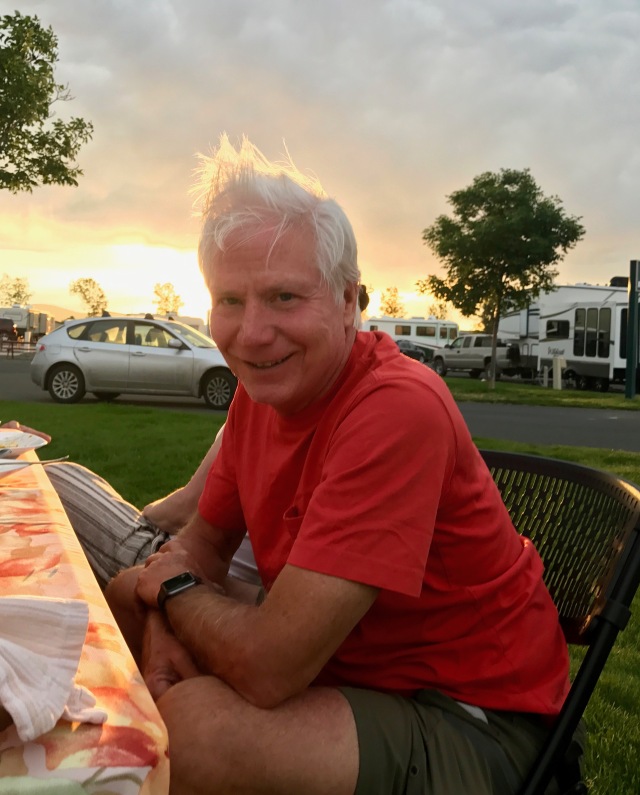 The sky turned spectacular shades of pink and gold.  Even Jays dog Maya enjoyed the show.

A toast to the sky!

Some of us were looking for a rooftop view. 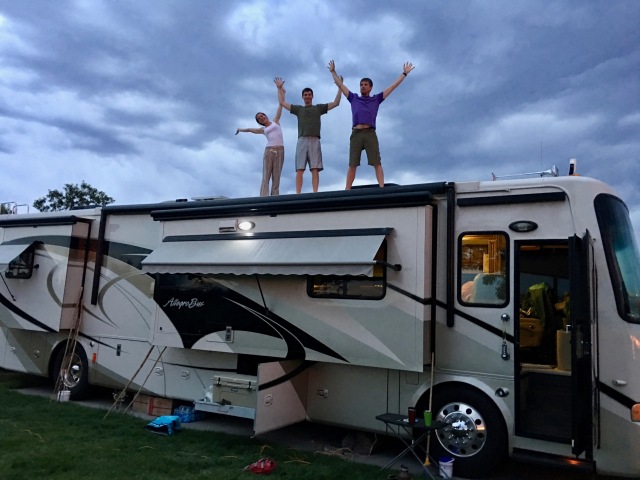 A most beautiful sunset.  Thank you Dax, Jay, Monique, and Sherry for coming to visit.

Then back to the lows.  What to do with fridge?  (now a worthless cooler).  We hired a guy on Craigslist to help us get the fridge out of its hole. 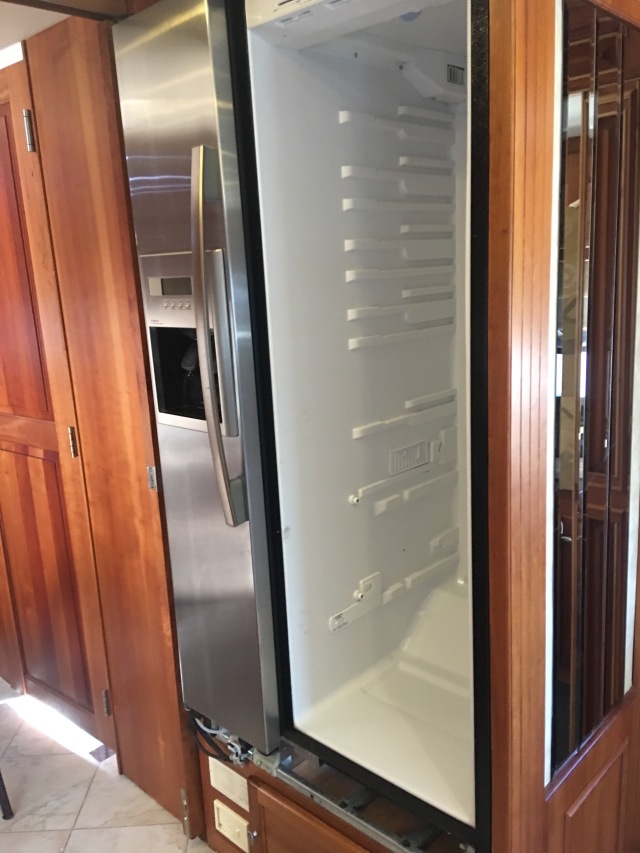 And out through the window.  Good riddance Whirlpool.

Now we feel better. Dean is cleaning up the fridge hole. 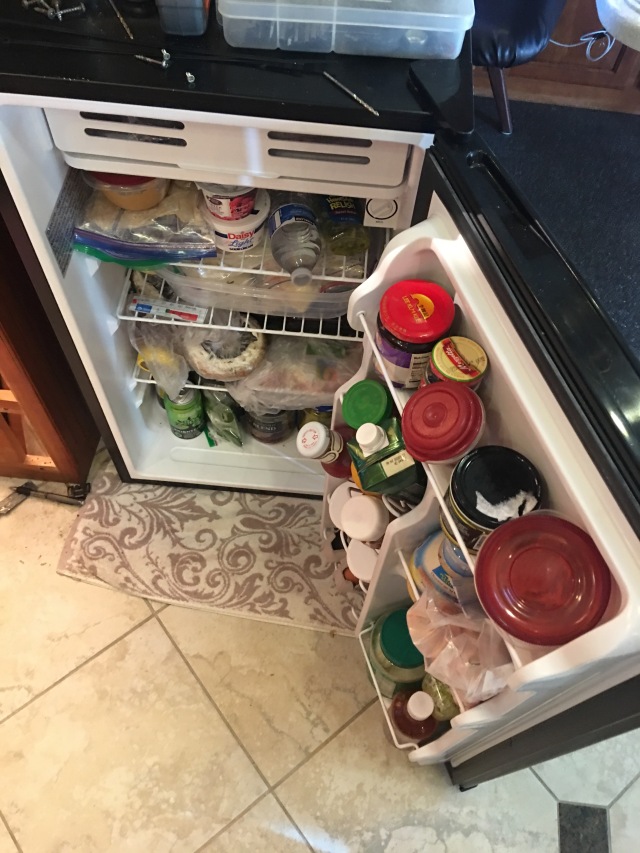 are in the process of ordering a new fridge to be installed in a couple of weeks.  We are also still rat free.  Back to the highs or at least middling.  July here we come…….